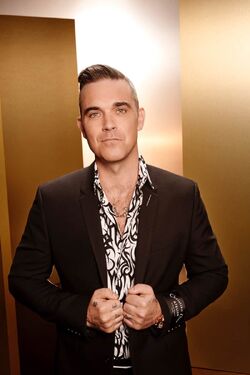 Robbie Williams (born 13 February 1974) is an English singer-songwriter who began his career as part of hugely successful boy band Take That from 1990 to 1995, reuniting with them from 2009 to 2012. He departed the band in 1995 to embark on a solo career and to date has sold 75 million records, making him one of the best-selling artists of all time. He has also received a record 18 BRIT Awards, winning Best Male four times.

As he was on tour in November for almost two weeks, he was replaced by Chic co-founder Nile Rodgers, who assisted Louis Tomlinson at Judges' Houses.

In April 2019, it was announced that he and wife Ayda Field would not be part of the judging line up for Series 16 of the show due to their busy schedules.

Community content is available under CC-BY-SA unless otherwise noted.
Advertisement